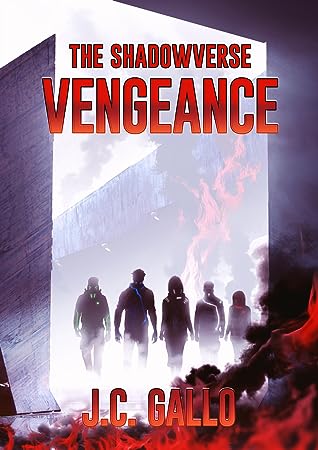 The Shadowforce is back, stronger than ever. One year has passed since Titan’s defeat, and balance reigns between the universes. Guided by the ones they lost, Johnny, Ryan, Sam, Jane, and Rose are beyond all the problems of everyday life, leading Earth into a new era.

Yet, this illusion of peace begins to evaporate when a mysterious, relentlessly unstoppable entity hiding in Earth’s cities begins to wreak havoc, destroying everything and everyone in its path and leaving a bloody trail in its wake. Suddenly, nothing is assured and no one is safe, even the heroes themselves.

Their relationships and character tested like never before, The Shadowforce must embark on an epic journey around the world and between realms, uniting once again if there is any chance to overcome this new foe, one that will not stop until everything they once saved is burned. No matter the outcome, nothing will ever be the same.

Thank you to the author, who sent me a copy of ‘Shadowverse: Vengeance’ in exchange for an honest review.
I received no compensation for this review.

This book is the opposite of middle book syndrome. Middle book syndrome is when the second book in a series ( even if it isn’t the middle of the series ) is always slightly slower or ‘meh’er than the rest. This was not the case because Vengeance is one of the best sequels to a debut that I have read yet. I didn’t realise how much I missed the Shadowforce until I was back in these pages, and ready to embark on the newest adventure with them!

One of the points I made in my review of the first book was that JC Gallo needed a little bit more experience for his writing to improve, and over the year he certainly has done that! I found myself falling into this book easier than the first, and the pacing of this book is amazing. While I felt like I was slightly overwhelmed occasionally, it was something that was detrimental to the plot and worked well, inciting myself as a reader to be stuck to my seat and eyes glued to the page, waiting for the next strike.

Gallo has also included such witty and entertaining dialogue to the plot, which enhances it superbly. The witty humour takes away from some of the darker themes of the book, and it was executed really well. The action scenes were well planned out and executed, there was no “he punched, and she ducked. He hit, and she hit back” but a lot more engaging writing which meant I felt no need to glaze over these scenes, which in any book is a struggle for me as I find the actual fighting less climactic than the development to that point.

As for everything else. The characters grew well with the book, working well together and developing in front of the reader throughout the travels and fights. Character development is a hard one to achieve in a book such as this, as the plot can be far more central than the characters who are enforcing it, but Gallo has done it really well! As someone who doesn’t read a lot about superheroes on a general basis, I find myself pleasantly enjoying this book and eagerly waiting for the next book in the series.

( I receive no compensation for the use of these links )