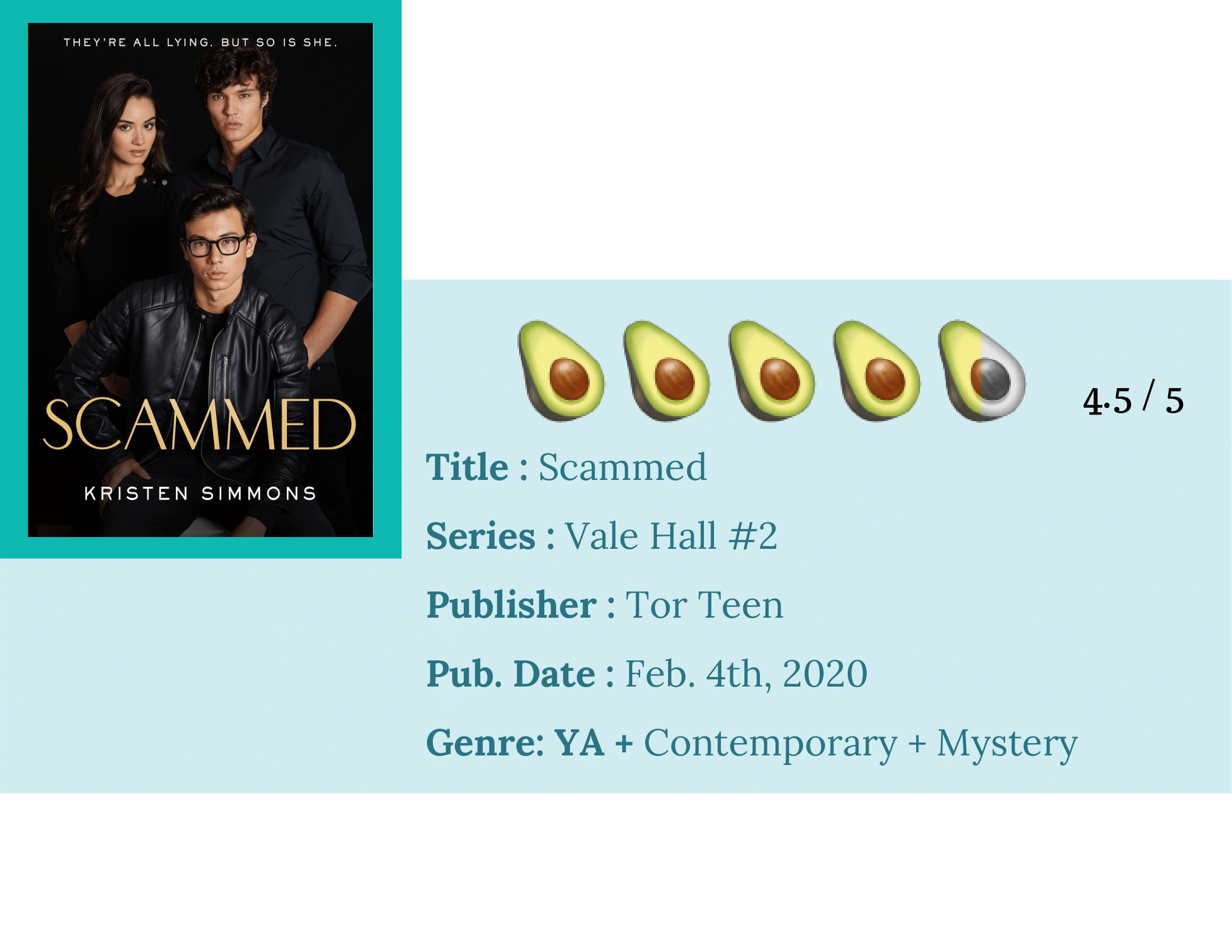 They’re all lying, but so is she.

Thank you to the publisher, who sent me a copy of ‘Scammed’ via Netgalley in exchange for an honest review.
I received no compensation for this review.

I read the Deceivers via Netgalley last year, and you can read the review for it here (the review is hosted on my old site).

Scammed was set up so well, and I am in awe of how the author managed to not only remind me of the entire last book through subtle dialogue and memories, but also has me dying for the next one.

I regret to say that this review, however glowing, will have to stay short in fear of spoilers, over ranting and just a generally long post of me going on and on and on about how much I enjoyed this book.

I have three points to make for this review. The cover, the suspense, and the characters.

The cover : what happened? The art for the first one was so beautiful and now the cover seems a bit dated and kind of implies that the whole book is a love triangle. It isn’t. I think sometimes non-avid readers ( and readers ) forget how influential a books cover is when picking up, receiving or buying a book. Also, am I the only one who thinks that the middle character looks like Oliver from How to Get Away with Murder? No? Alright then.

The suspense in this novel is amazing, and pairing it with the action based scenes are a recipe for Readers Bliss. I found that even as something was being revealed, my brain kept being far ahead of the book and trying to work out different plot places. Not only the suspense but I also found that the novel, even with aspects of romance, also had a plot which I loved. Sometimes these things get lost behind an Epic Love Story, but not this time.

The last thing is the well built characters. All of them, even characters who we only talked to for a moment or didn’t speak at all. Everyone was fully rounded with a backstory and feelings and actions. I would quite happily read a book about Vale Hall with short stories of people’s first missions and backgrounds before Brynn arrived.

So, overall? I would say that this is an awesome sequel. You need to read the Deceivers for sure. Cover art? Meh</strong, it does look a little dated, but don’t believe it. This book isn’t a full love triangle, contrary to what the models on the front would have you believe. The suspense in this novel is enough to give you a full-night-reading-binge. The characters are so well built that I want every student to have a short story for themselves. I think Simmons would do it well.

What books did you vote for? Have you read any of the winners?